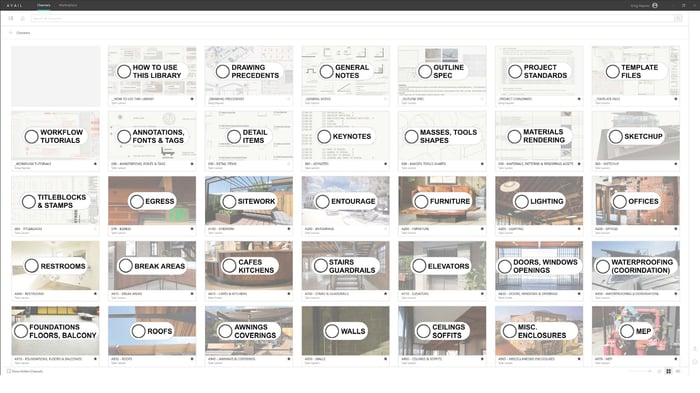 LACK OF CLARITY & EFFICIENCY. PRIOR TO AVAIL IMPLEMENTATION, THE 25-PERSON DESIGN-BUILD FIRM WAS STRUGGLING TO CREATE AN EFFECTIVE DIGITAL ENVIRONMENT, ONE THAT WOULD SUPPORT DESIGN AND DRAWING PRODUCTION HOLISTICALLY.

The Studio Director was increasingly concerned over drawing sets that were subpar: incorrect title blocks, inconsistent line weights, incorrect drawing conventions and deviations from Project  Standards were persistent. Project Architects and Job Captains were at odds over best practices from one project to another, signaling to management that the issues were more than just casual errors. The design studio included a Fabrication Shop, meaning that any lack of consistency in their 3D models also affected the relationship between the two sides of the company. Middle-management recognized that a more critical appraisal of the firm’s production resources was needed.

With all of the firm’s files broken out into multiple servers and endless file folders, reckoning with the inconsistencies felt like a game of whack-a-mole: what resources were available to guide Junior Team members through the drawing and modeling process? Were they optimally organized and accessible? What data was duplicated, overlapping or inconsistent? The firm needed a system to help them recognize and address these gaps and discrepancies, and their current CMS (Windows File Explorer) was not adequate.

On the management side, there were a few requirements that needed to be addressed before  adoption could occur: namely vetting security concerns. Because AVAIL allows firms to maintain their data on their own file servers (providing visualized “links” to their data), AVAIL passed the test. It was also important to management that the interface be simple, so that they did not burn fee training people on another complex software system that risked low adoption. AVAIL’s clean interface gave them confidence that adoption by younger, tech-savvy users would be high. AVAIL’s unparalleled Customer Service Record sealed the deal.

“The final result was a system that created a sense of calm, trust, and confidence from the top down, beyond anything I’ve seen in any Content Library before.”

CLARITY THROUGH IMPLEMENTATION. THE TEAM BROKE DOWN THEIR SOLUTIONING EFFORTS INTO FOUR CORE AREAS OF WORK, WHICH OVERLAPPED AND DOUBLED BACK ON EACH OTHER DURING THE DEPLOYMENT PHASE.

The first order of business was to undergo a thorough purging and discovery process (“the confession”). This involved a small team, led by the Studio Director, combing through Revit Container Files and server folders to ensure that all of the firm’s outdated, duplicate, and unwanted resources were removed. This resource purging included the following bodies of data:

After removing unwanted content, the process of reunification began. This involved aligning the metadata contained in Revit families with non-Revit resources, such as Outline Specifications and Project Standards. This work, aided by Dynamo scripts and clean-up utilities such as Ideate  explorer, ensured that discrepancies between interrelated data points did not lead to contagious inaccuracies. This provided the peace of mind and confidence needed to carry forward with indexing the Library.

The firm knew that they wanted every resource to have a clear and obvious location, one that would be easily discoverable from the AVAIL Home screen. Because AVAIL allowed files to live in their current location place, the transition (from a software standpoint) was largely painless: all of their files stayed where they would have in File Explorer, and simultaneously became exponentially more discoverable. It was important that team members see exactly where they were going before they even hit Search. Each Channel Card was created in InDesign and given a custom image that would help it be recognizable from a distance, with a bold-faced title set against a pill-shaped mask. They sorted the channels (using numbers and underscores) into three Overall Categories:

When the team opened up the Home screen and saw all of the Channel Cards, the shift in workflow and perception began instantaneously. Channel Card Images guided them towards the content they needed without any confirmation from their BIM Manager. 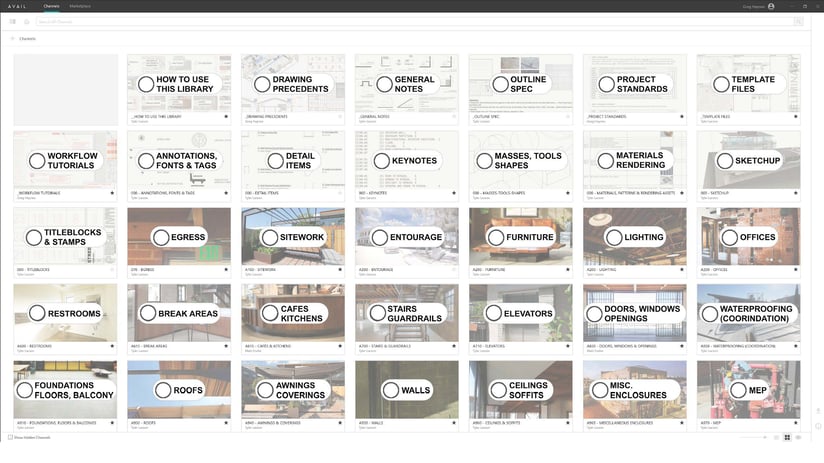 The combination of text and imagery in the Channel Cards allowed users to move seamlessly between channels in a manner which, according to one BIM Lead, made them feel a marked “sense of calm.”

Within each channel, the visibility and contextualization of resources had a similar clarifying effect. The simultaneous visual understanding of multiple related resources meant coming to understand the gaps: where there were duplicates or overlaps between files, where certain Project and Office  Standards were outdated or incomplete. The management of the firm could SEE the content of Word Documents describing office protocols side by side and begin to understand how they related, or did not relate. Zeroing in on these lacking or incomplete resources allowed them to leverage clarity to hold team members accountable for the casual errors that had plagued the team previously.

Additional clarity came when resources like Specification Sheets were indexed into the system. The team used Bluebeam Revu to automatically mine data into file names for auto-tagging. As more and more content was indexed, a sense of how beneficial this software would be began to emerge.

Once the firm had finished indexing and sorting their content, a team member had the idea to search for content across a particular topic: parking.

“I remember typing ‘parking,’ into our cross-channel search bar and seeing an array of unexpected results: Revit families for parking stalls, parking-related code references, specifications for garage light fixtures, URL links for vendor websites: all on one screen, with the ability to filter down by Channel. It felt like looking into a crystal ball that reminded me of resources I should be referencing…, many I didn’t even know we had.”

No amount of planning or analysis could have prepared the firm for this ’Aha’ moment. The overwhelming ease with which massive swaths of data could be indexed and connected was revolutionary, and constituted a new era for a firm determined to streamline its processes.

With visibility into their files greatly increased, the team began to understand the state of their data and standardize more extensively. Having used AVAIL to purge outdated 2D details and duplicates, the remaining details were hybridized: this involved grouping all of the 2D Elements that would be converted to 3D Details in a model, and applying a View Template to color and modify those elements.

For this team, the effort to get the Digital Library to this point had been great – and they needed to ensure that their maintenance plan kept it up to date.

With all of the firm’s assets indexed, sorted, and tagged – they turned to their “How To Use This Library” Channel to ensure consistent adoption and continued health of the Library. This Channel featured quick MP4 video and PDF tutorial documents directing the team on how to use the AVAIL system, and clarifying best practices within the software. This Channel sat at the top of the AVAIL interface, and proved particularly helpful for onboarding. New staff members could open AVAIL and quickly build an understanding of the firm’s resources.

Since the team was not using AVAIL Steam to automate their indexing of their Digital Library, they turned to Smartsheets to track what was indexed. This spreadsheet utility allowed them to create a running list of tasks and updates that would emerge as the Library aged in place, creating a hub for ideas and IT requests. Files that needed to be updated, projects that needed to be indexed, and standards that needed to be clarified were each added by the Library Team, and subsequently assigned a due date and a team member. Tasks were checked and highlighted as they were completed, QA/QC’d, and deployed.

This was attained with focused back-and-forth movement between project phases over the course of six months. The combination of these two transformations meant that siloes were knocked down, transparency was increased, and users were continually discovering assets that they didn’t even know they had or needed. AVAIL constituted more than a Content Management System: it became a content discovery system, enabling teams to locate the unknown from behind the veil of their Russian-Doll folder system.

With clarity, trust, efficiency, and access all built into the system by design, firm management was now able to focus on staff performance issues with more acuity and focus. With proper maintenance of the Library performed by a core team, the user experience remained simple, straight forward, and sustainable. Project Managers and Job Captains were finally able to focus more on developing drawing sets – and significantly less on managing their content. 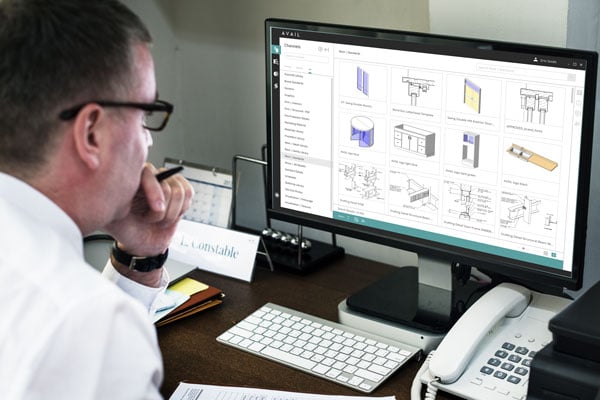